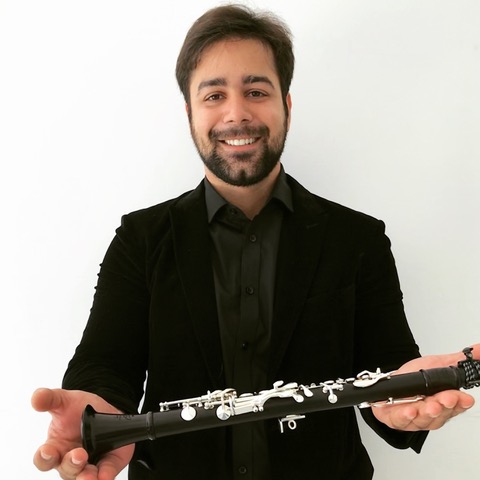 “Once you meet Silverstein Works you’re going to change your perspective of easily playing, round sound, easy projection and a full gamut of harmonics.”

Clarinetist of the UFBA Symphony Orchestra, Hudson began his musical studies at the age of 8 at the Society of Culture and Music 1st of November in his native city, Timbaúba, Pernambuco. He holds a Master’s Degree in Chamber Music from the Federal University of Rio Grande do Norte. He took part in his Bachelor of Clarinet at the Hochschule for Music in Karlsruhe-Germany under the guidance of Wofgang Meyer through the UNIBRAL program and completed his degree at the Federal University of Rio Grande do Norte under the guidance of Amandy Bandeira where he got the title of laureate student. He was a temporary professor of Clarinet and Chamber Music at the Federal University of Rio Grande do Norte in 2015 and 2016 and in the Government program “PRONATEC – Band Musician” from 2014 to 2017. He won as competitions: July 2011 – International Young Soloists Competition – 1st Prize “Eleazar de Carvalho Festival” Fortaleza-CE, Brazil November 2011; Winners Competition – 1st Prize “Eleazar de Carvalho Week” São Paulo-SP, Brazil October 2014; EMUFRN Orchestra Competition – 1st Prize Music School UFRN Natal-RN, Brazil. Mr. Ribeiro is regularly invited to participate in important festivals in Brazil and abroad, such as the first and the second Paraibano Clarinetists Meeting, the first and the second Clarinetists Meeting in Natal-RN, the II International Clarinetists Meeting in Belém-PA, ClarinetFest 2017 and 2018 , the first Pernambucano clarinet meeting. Currently is artist of the brands of Clarinet Royal Global, Reeds and Silverstein Ligadures.