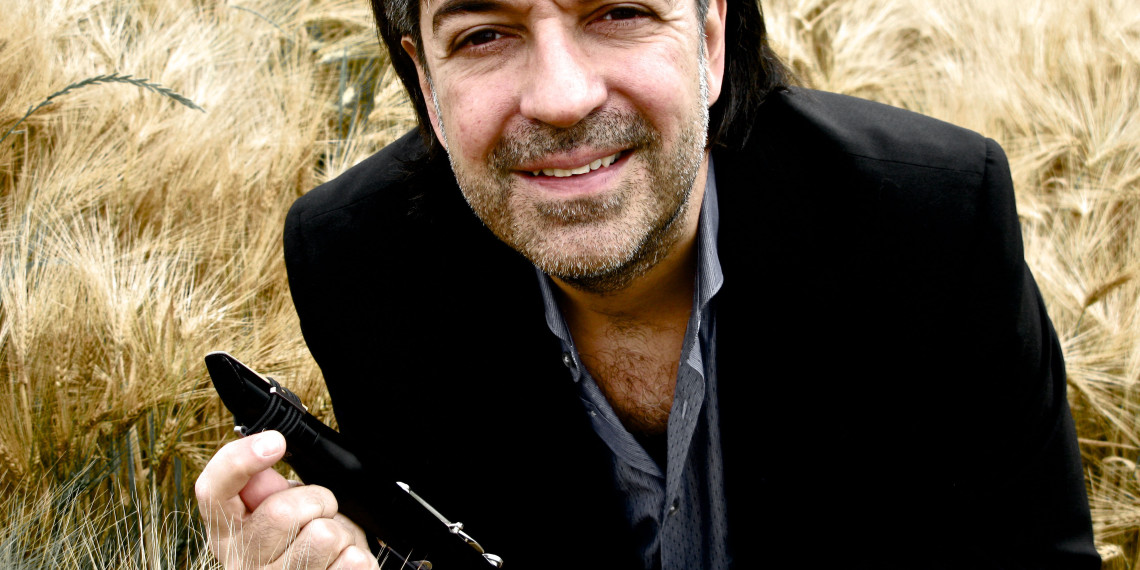 “Listening closely to Santilli’s music one can hear the Italian influence on the Ticino-born musician…” remarks the Zürcher Unterländer newspaper about Marco Santilli’s work. Marco Santilli studied classical clarinet with Hansjürg Leuthold and Heinz Hofer at the Zurich Music Academy. He expanded his training and consolidated his skills in instrumentation and arranging with the study of wind orchestra conducting under Franco Cesarini. After receiving his diploma in orchestral performance and teaching, he became adjunct clarinettist for the orchestra of the Zurich Opera House. He then was selected as adjunct clarinettist for the Orchestra della Svizzera Italiana. Marco earned his soloist diploma with a “First Prize for Virtuosity” from the Lausanne
Music Academy, where he had studied clarinet under Frédéric Rapin.

Marco changed from the classical to the jazz music world, being able to keep a foot on each side. He took lessons with George Robert, participated in various Jazz workshops with Gary Burton/Makoto Ozone, Oliver Ker Ourio, George Gruntz and Ken Peplowski (NY). He has also taken part in “Berklee at Umbria Jazz”.

He played chamber music and concerts with the Zurich Opera Orchestra, the Zurich Tonhalle Orchestra, the Winterthur Musikkollegium, the Schweizer Philharmonie, Collegium Musicum St. Gallen and the “Soli Wind Ensemble” (Italy). As jazz musician he performed at “Estival Jazz” Lugano, the “Montreux Jazz Festival Off”, “Blues to Bop” Lugano and in the United States with, among others, the Michael Rabinowitz quartet (Mingus Orchestra).

Marco leans markedly towards jazz, although improvisation and performance technique are not the only things that matter to him, but respect for the piece, too, which must convey emotions. So he himself became a skilled composer and arranger. As a clarinettist he is comfortable in a very wide range of styles, with a particular fondness for songs he has composed and arranged, since he can imbue these with his ideal sound, bringing out the tonal richness of the ensemble in question.

The following projects characterize his current works:
– CheRoba, Jazz Quartet with Lorenzo Frizzera (g), Ivan Tibolla (p) and Fulvio Maras (perc). The recording of their cd with original works from Marco shall take place at the Radio studios RSI Lugano in November 2015;
– Orgelwind, Jazz/World Duo with Ivan Tibolla (org) playing own compositions. (CD „Orgelwind“, CD Baby, 2015);
– Jazz Duo Santilli Alderighi with the pianist Paolo Alderighi. (CD „Godiva soleva“, MONS Records, 2012);
– Belli in zona, Folk/World/Jazz with Giordano Muto (sax). (CD „Belli in zona“, ALTRISUONI 2007);
– Zappa Santilli, Crossover with cellist Mattia (Marco has been mandated the composition “Equinozio d’autunno”, a suite in four movements for clarinet/bass clarinet and violoncello. This suite has been premiered as a part of the concert series “Concerti in San Martino”, Ronco sopra Ascona;
– Soloist with the Amadé Clarinet Octet performing jazz standards, big band arrangements and compositions written by Marco;
– Marco Santilli Rossi, Pop/Pop-Rock, composing and arranging pop-songs, produced together with Urs Wiesendanger. CD „Tempi passati“ will be published in summer 2015 (www.mx3.ch/artist/marcosantillirossi);
– Marco has been commissioned by the International Alpentöne Festival to write a composition for a 9 elements band. This work will be supported with a grant by Pro Helvetia. “La stüa”, a synthesis between composed and improvised music, will be premiered at the International Alpentöne Festival in Altdorf 2015;
– Being adjunct clarinettist of the Philharmonia Zürich, Marco has taken the assignment of arranging a choice of classical pieces for the cyclus “Geschichten erzählen” (formerly “Opera viva”) of the Zurich Opera and actively takes part in its ensemble. Participation at the “Salzburger Festspiele” in August 2012;
– Since 2013 participation in the board of the Swiss Clarinet Society (SCS);
– Since June 2015, elected member to the board of the SUISA Distribution and Works Committee.