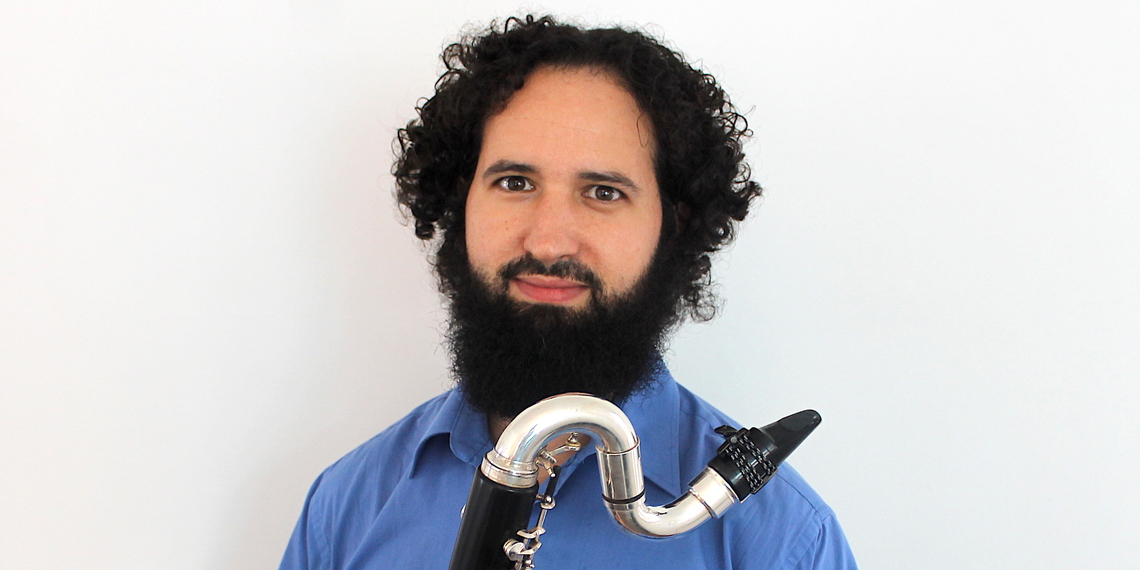 “Having tried many ligatures before, I admit to being skeptical about the benefits of the Silverstein. But while trying them on clarinet and bass clarinet, I and others listening to me immediately heard the effect and how it opened up the sound! But what really amazed me was when I got home and tried it on the Eb clarinet- suddenly a whole new frequency range appeared! The Silverstein ligature brought out lower frequencies in the instrument that totally transformed the sound and added much-needed depth. I’ve also been very happy with the way it’s opened up the sound of my saxophone and helped make my articulation even clearer.” – Jason Alder

Jason Alder is a multifaceted (bass) clarinetist and saxophonist, working in the fields of classical, improvised, jazz, world, popular, and electronic music. Originally hailing from the metro Detroit area, in 2006 he relocated to Amsterdam and has since based himself in Europe. He keeps a busy international performance schedule as a soloist, improviser, chamber and session musician. In addition to his own projects, Jason is also regularly found performing with various orchestras, jazz ensembles, bands, theater groups, improvisers, and dancers throughout Europe and the United States.

Jason is a specialist in new and contemporary music. He works closely with composers and has commissioned and premiered many pieces for clarinet and bass clarinet solo or as part of an ensemble, including several for his Shadanga Duo with flutist Kata Szanyi. He also pushes composers to write for the less common clarinets, such as the alto and contra. Jason also works in various genres of electronic and electro-acoustic music. In 2010 he reconstructed Stockhausen’s 1966 piece “Solo for melody instrument and feedback” to be played with only a computer performing the roles of at least 6 people that were originally required, for which his performance was written about in bass clarinet pioneer Harry Sparnaay’s book. He also worked with composer Robert Ratcliffe to develop software to expand on the realization of his electro-acoustic piece “Wake Up Call”, which resulted in a paper published in the journal Sonic Ideas. As well as chamber music, Jason has performed in many larger ensembles and orchestras, including Ostravska Banda International Chamber Orchestra, Insomnio Ensemble, Amsterdam Collage Ensemble, Camerata Terra Reno, The Pale Blue Dot Orchestra, Amadeus Orchestra, Orkest aan de Amstel, European Clarinet Ensemble, and European Bass Clarinet Ensemble. He’s performed at a number of festivals including the Gaudeamus New Music Festival, Ultima Oslo Contemporary Music Festival, International Festival for Innovations in Music Production and Composition, Blue Clarinet Day, SABRe Bass Clarinet Day, Conservatorium of Ghent Week of Contemporary Music, Istanbul Woodwind Festival, International Clarinet Association ClarinetFests, and the European Clarinet Festivals. In 2009 he attended the IMPULS International Ensemble- and Composers-Academy for Contemporary Music in Austria where he worked with members of Klangforum Wien, as well as premiering three pieces in the groundbreaking MELE (Motion Enabled Live Electronics) concert, and in 2014 took part in the New Music Incubator in Lithuania which brought together musicians from all over Scandinavia and the Baltics for a week of collaboration and experimentation.

As an improviser he can be found playing in Sonido 13, an electro-acoustic improvisation duo with saxophonist Harry Cherrin; improvising film soundtracks with the Magic Lantern Show Orchestra; exploring music as it relates to movement with members of the improvised dance and theater community such as the Mono Dance Collective; and often playing with other members of the improvised and experimental music scene, including Alex Ward and Tom Jackson, with whom he’s recorded a CD of improvised clarinet trios. While working with vocalist, poet, and spoken word artist Magdalena Hahnkamper as the multimedia performance art duo megalodon/na, they won the Lyrik Live prize from the Austrian radio Ö1.

Jason also plays in a variety of jazz, world, and popular music bands. Performing as a member of the “psychedelic klezmer-jazz” quartet Payazen!, has taken him to many festivals, including Glastonbury and as a featured guest at the Ferrara Buskers Festival, and on tours around Italy, the UK, Ireland, Switzerland, Austria, Slovenia, Hungary, Czech & Slovak Republics, and Israel, as well as into the studio for 3 CD releases. As a saxophonist he plays baritone in the afrobeat band JORO, the funk/soul band 528 and a Beat, and tenor in the rock bands The Lazlo Device, Novack, Palumbo and the Funk, and Matuki, and with the Bengali-jazz fusion band of singer Shapla Salique. Jason also performs as a woodwind doubler for musical theater shows, in the London Musical Theatre Orchestra, and toured with Grammy and Tony Award winner Idina Menzel and Rob Mounsey. As a session musician, Jason has recorded clarinet and baritone saxophone for the CD of the Balkan-jazz orchestra Mimika, clarinets for CDs from Dutch artists Canvas Blanco, Wouter Seinen, and RaaskalBOMfukkerz, and is featured on the soundtrack for the short animation “Beren op de Weg” by Nadia Meezen which has been screened at festivals around the world.

An active member of the International Clarinet Association, Jason is the Editor of The Clarinet [Online], the new web supplement to the print journal.