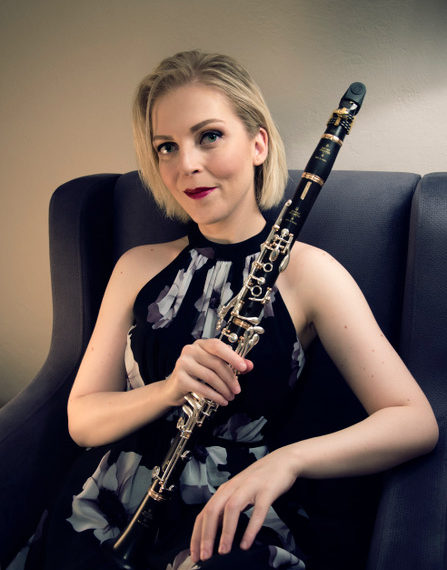 “1.5 years ago when I first met Silverstein Cyro4 Ligature I was in love with and I only play with it. It always help for my music journey, making projection bigger and rounder even if I use soft reeds. When you play with it, it gives you a confident. I am very happy to play with it.”

Born in 1987. She started her clarinet education at Mimar Sinan Fine Arts University State Conservatory with Feza Cetin in 1998.

ln November 2005, she won the third prize at the “II. International Young Virtuosos Competition” that was held by Lubomir Pipkov International Music School in Bulgaria.

ln May 2008, she successfully performed the Clarinet Concerto of A Copland at ITU – Mustafa Kemal Hall.

ln September 2008, she passed the examination of Istanbul State Opera and Ballet Orchestra and started to work as a clarinet player in the orchestra of the institution.

At the request of Fazil Say, between 17 – 18 February, 2012, she successfully performed the “Hayyam” Clarinet Concerto Op. 36 of Fazil Say with Eskisehir Metropolitan Municipality Symphony Orchestra under the baton of Conductor Naci Ozguc.

She was invited to the Samos, Young Artists Festival in August, 2012 with Istanbul Wind Ensemble Chamber Music Group, which she founded. The group has recently finished the Turkish Composers Album works with Fazil Say and continues to actively give concerts.

In the first days of the year 2013, she became the Turkish artist of the Buffet Crampon brand.

Her name has been taken into the World Known Soloist Clarinet Players list of the World Clarinet Alliance.

Ecesu Sertesen had been invited to the 401h Jazz Days in Germany, Freiberg City on April 24, 25 and 26, 2014 and she performed the Clarinet Concerto of Hasan Niyazi Tura and the musical piece of Leonard Bernstein called “Prelude, Fugue and The Riffs” with the Mittelsachsischen Philharmonie Orchestra under the baton of General Music Director Raoul Gruneis, in the concert called “Classic meeting with Jazz”. After three concerts in Freiberg, Dobeln and Mittweida, “unique” and “silky” were the words used to describe her clarinet playing.

ln December, 2015, she had been invited to Hong Kong Festival Wind Orchestra to give a concert as a Buffet Crampon artist and there she performed the Clarinet Concerto of Hasan Niyazi Tura with her wind orchestra; after that she performed a masterclass together with Tom – Lee Music and Buffet Crampon.

ln August 2016, she was a juror at the BUFFET CRAMPON CLARINET COMPETITION 2016 in Taiwan and there she also gave a recital and a three masterclass in Taipei, Tacihung and Kaohsiung.

On 25th of September 2017 she performed a recital at Buffet Crampon New York Showroom in NYC with a great success.

In October 13rd, 14th and 15th she performed Fazil Say Op 36 “Khayyam” Clarinet Concerto with the Brandenburgisches Staatsorchester Frankfurt under the batton of Howard Griffits in Germany for three solo concerts in Frankfurt (Oder), Postdam and Brandenburg.

In September 2018 she will make Max Bruch Clarinet & Viola Double Concerto Op88 recording with Radio Symphony Orchestra Vienna under Howard Griffiths. CD will be released from SONY. Young talent violist Kyoungmin Park will be her partner on this album. Orpheum Foundation which supports young talents on the world stages will support this project.

ln parallel to her solo works and chamber music career, she is still working as a Principal clarinet player at Istanbul State Opera and Ballet Orchestra.