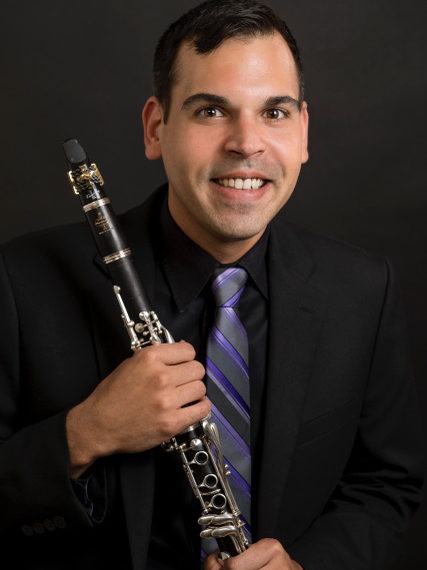 “Silverstein Works ligatures enable me to realize my vision for whatever I am performing. The reed vibrates freely and responds easily at all dynamics and in all registers. I enjoy the various subtle alterations achieved through different positioning of the fine tuners!”

Critically acclaimed clarinetist Christopher Nichols enjoys a dynamic career with performances as a soloist and in ensembles across the United States and abroad. As a professional instrumental soloist, he received praise from the American Prize: “…lovely long line, evocative playing, flexible…tone is rich and round, welcoming, clean and elegant…fine performances from a skilled artist.”

Dr. Nichols regularly performs with orchestras such as the Philharmonia of Greater Kansas City, the Pennsylvania Philharmonic, the Kennett Symphony and the Allentown Symphony Orchestra. He is a member of Christiana Winds and has recently collaborated with the acclaimed Serafin String Quartet, the Taggart-Grycky Duo, and members of the Philadelphia Orchestra, Detroit Symphony Orchestra and Baltimore Symphony Orchestra. He served for over a decade in the Army Music Career program with performances throughout the United States, Germany, France and Austria.

A dedicated pedagogue, Dr. Nichols joined the faculty of the University of Delaware as Assistant Professor of Clarinet in 2013. As an artist clinician, he regularly appears at universities throughout the United States. His students have found success in competitions, won positions in military bands, and serve as music educators.

Dr. Nichols has appeared as a featured soloist at conferences of the International Clarinet Association, European Clarinet Association, National Association of Collegiate Wind and Percussion Instructors and College Music Society. Live performances have been selected for inclusion in the Audio Performance Archive of College Music Symposium. Additionally, the Australian Broadcasting Corporation, and public radio in Kansas, Vermont, New Hampshire, New York and Michigan have broadcast both live performances and studio recordings. In 2015, the Delaware Division of the Arts awarded Dr. Nichols an Established Artist Fellowship in recognition for his work as a solo recitalist. The internationally distributed label Navona Records released his debut recital disc Elegia with pianist Julie Nishimura in September 2017.

Dr. Nichols’ is an active member of the National Association for Music Education, College Music Society, Honor Society of Phi Kappa Phi, Pi Kappa Lambda Music Honor Society, International Clarinet Association and Music Teachers National Association. He has served as the College Music Society Northeast Chapter’s Executive Board Member for Performance, is currently Audio Reviews Editor for The Clarinet and will begin a two year term on the executive board of the International Clarinet Association as secretary in September 2018.

Excerpts from Reviews of Elegia

Pizzicato: “In this varied program, Christopher Nichols’ performances are rich-timbred, imaginative and vivid. The clarinetist impresses with a virtuoso playing, yet the most fascinating here is his finely nuanced cantabile which makes the slow movements so charming.”

Fanfare: “Any recital that ranges in style from that of Camille Saint-Saëns to John Cage automatically suggests versatility on the part of the performer, and indeed that is to be found in the playing of clarinetist Christopher Nichols, who plays sublimely throughout the present disc.”

Gramophone: “Nichols gives a very fluent account, relishing the many different textures the master orchestrator deployed, and Nishimura’s accompaniment is sensitive and never overshadows her partner.”