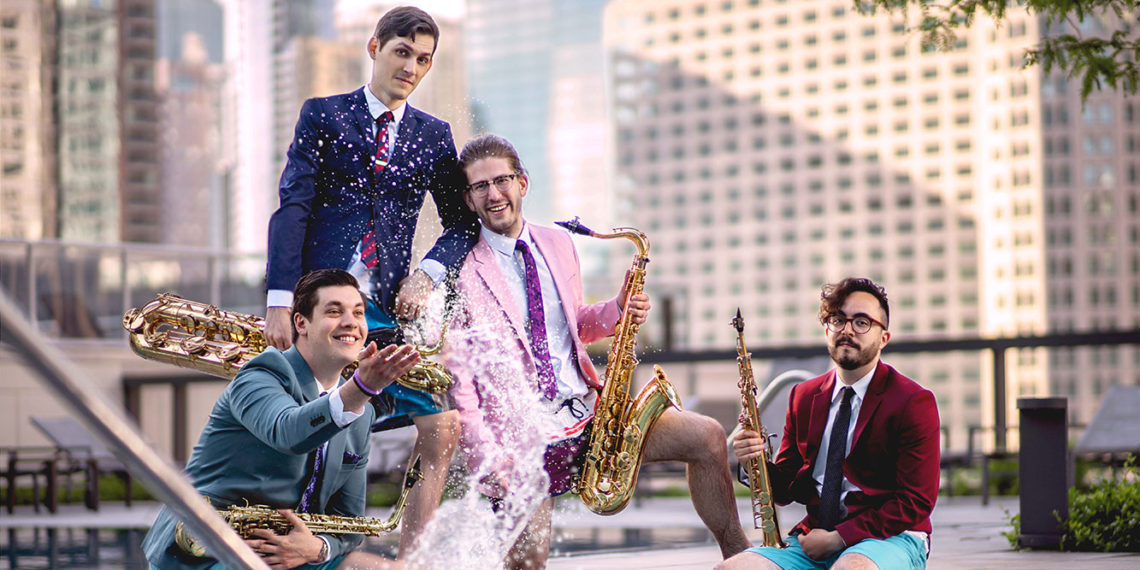 Founded in 2016, ~Nois (pronounced “noise”) has become one of the premier ensembles in the United States by combining contemporary chamber music and improvisation to connect with audiences in unique concert experiences. Known for their “truly innovative musicianship” and “raw creativity” (Cacophony Magazine), ~Nois has been awarded top prizes at prestigious chamber music competitions including the Fischoff National Chamber Music Competition and the M-Prize International Arts Competition.

In 2020, ~Nois released its debut album, Is This ~Nois, as a love letter to the quartet’s home of Chicago, featuring music by composers with strong ties to the city and its vibrant new music scene. Hailed as “fresh and intense” (The WholeNote), the album was named among the “Best of Bandcamp Contemporary Classical: June 2020” by critic Peter Margasak. “If ~Nois’ debut album is any indicator of what is to come from the group, the genre of the saxophone quartet has a bright future on the near horizon.” (I Care If You Listen).

Since their founding, ~Nois has presented over 90 performances in 20 states from coast to coast. In addition to their regular concert season in Chicago, ~Nois has performed on festivals and series such as Big Ears, the Great Lakes Chamber Music Festival, and the University of Chicago Presents Series. In addition, ~Nois is in demand as a guest artist and lecturer at universities and secondary schools across the nation having held residencies and given performances at over 30 institutions including University of Southern California, the University of Colorado – Boulder, the Manhattan School of Music, and Princeton University. For the 2020/2021 academic year, ~Nois was appointed as the Don Michael Randel Ensemble in Residence at the University of Chicago.

Dedicated to expanding and redefining the saxophone quartet repertoire, ~Nois has premiered over 40 works including compositions by 2019 Gaudeamus Prize winner Kelley Sheehan and 2018 Guggenheim Fellow Tonia Ko. ~Nois recently partnered with the Kinds of Kings composer collective on the Afterimage series, a collection of concerts in New York, Chicago, and Los Angeles and has performed with the Bang On A Can All-Stars, Claire Chase, Eighth Blackbird, and My Brightest Diamond.