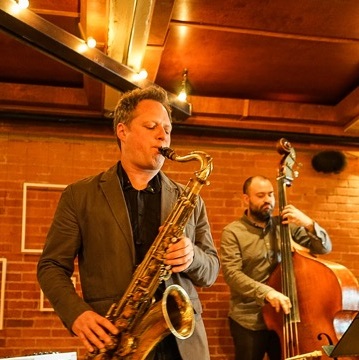 Typically, there are two types of successful musicians: those that play well and those that are well schooled. Jerrold Dubyk has found a celebrated grouping of those elements that pour through his saxophone with each performance.  Acclaimed jazz drummer Victor Lewis describes him as “a solid voice who performs with a sense of musicality and maturity that I expect from anyone who I perform.”  With a desire for being versatile and expressive on the stage, Dubyk brings an inspired ability towards the melodic line and harmonic gestures in the saxophone tradition, with a devotion to his own personal sound.

Inspired by the diverse Canadian saxophonist, Ralph Bowen, Dubyk began his studies in his Masters in Performance at Rutgers University (New Jersey). This marked a major turning point for him. In pursuing deeper studies of his art, he boldly adopted a “total makeover approach” and “abandoned all his previous knowledge”.

During his time of living in the New York area from 2003 – 2005, Dubyk absorbed as much live music as possible. As immersed in his studies as he was, Jerrold never passed up the opportunity to go anywhere on the east coast to see and hear the greats perform. He would make it a point to get to NYC, Washington, or Philadelphia to see his heroes. Highlights included seeing Ralph Bowen play every live jazz gig he had in two years, watching Branford Marsalis perform with Elvin Jones, attending the last night of the Michael Brecker Quindectet tour, Maria Schneider’s Jazz Orchestra, Terell Stafford, Wynton Marsalis, Sonny Rollins …it was life changing. In addition to seeing great performances, Dubyk was able to partake in performances with his Rutgers colleagues. Playing alongside with Kenny Davis, Sean Jones and Andy Hunter along with his professors Victor Lewis, Stanley Cowell, Ralph Bowen and Vic Juris enabled Jerrold to perform all around New Jersey, New York and Pennsylvania. Dubyk began to hear and live music differently after his experience at in the New York area, and that clarity seeps through his compositions and performance.  These deep connections have brought Jerrold to performing at the Blue Note (NYC), Dizzy’s Club Coca-Cola, Ortlieb’s Jazz Haus and a cross Canada tour at all the major festivals and jazz clubs in Canada.

Dubyk released his first album “The Way You See It” (2006) followed by a Canadian jazz festival tour the following summer. In 2008, he brought a new band together with Vancouver musicians Jesse Cahill (drums), Chris Gestrin (hammond organ) and multiple Juno award winner Brad Turner (trumpet) to create “The Maverick” – which won the 2009 Western Canadian Music Award for Jazz Recording of the Year, and set Dubyk’s mark in the Canadian jazz scene.

For his third album, “/ˌIn.vɪˈteɪ.shəns/” (January 2014 release), Dubyk combines his core Vancouver bandmates Brad Turner (piano), WCMA award winner Jesse Cahill (drums) and new band members, National Jazz Award Winner/Juno Nominated Jodi Proznick (bass) and Grammy nominated jazz musician Terell Stafford (trumpet).  Despite his accomplishments, this recording is not about what’s been done in the past; rather, it is about directing the music through the band’s own artful expression and is set to express the journey of the friendships that develop when great and humble people put the needs of others first.

And in between his dizzying array of projects, Dubyk still finds time to best express his love of music by educating others.  An educator as well as a performer, Dubyk is the Director of Music at Strathcona High School, on faculty at Macewan University where he teaches jazz saxophone and also on faculty at the University of Alberta.

In November 2012, to celebrate his contributions in the arts and youth of Edmonton, Dubyk was included into Edmonton’s Avenue Magazine “Top 40 under 40”.