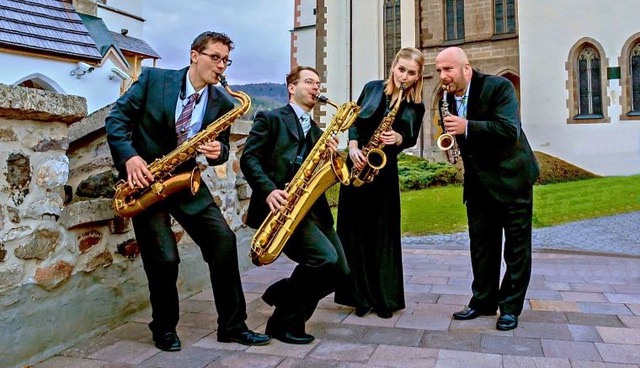 Saxophone Syncopators is a unique saxophone quartet that specializes in performing the authentic musical style of ragtime in arrangements for four saxophones. The arrangements of this music come from the years 1910 – 1920 when saxophone music was expanding in the music scene and becoming a great inspiration for  performers and composers.

Saxophone Syncopators play the oldest ragtime and hot jazz from the years 1912 – 1920 in the original arrangements for four saxophones following the footsteps of the saxophone
ensembles from this period such as Six Brown Brothers, Columbia Saxophone Sextette, The Missouri Entertainers, Joe Thomas Saxotette, Hollis Saxophone Quintet, etc… To achieve the most authentic and accurate sound , Saxophone Syncopators use original period instruments from the twenties of the last century. Besides their focus on ragtime, they also perform so called classical music that was composed for saxophone quartet in the period of the early 20th century.

Ján Gašpárek graduated at Bratislava Conservatory in 2000. He continued in his studies at Academy of Art in Banská Bystrica where he achieved Master degree in 2005. During years 2003 and 2004 he attended international interpretation master classes in Ráckeve Music Castle Festival, Hungary at teachers Jože Kotar, Kohán István and Dittrich Tibor. Among his pedagogic praxis and other solo and chamber activities, he is member of saxophone quartet Saxophone Syncopators in which he plays alto-saxophone.

Frederika Babuliaková graduated in saxophone at Bratislava Conservatory in 2014 with special award “The best graduate of the year”. Presently she studies at Academy of Art in Banská Bystrica in class of Alexander Stepanov. In 2014 she won 1st place in Slovak Conservatory Competition and in the same year she had solo concert on prestige Middle-European festival of chamber music in Žilina. She regularly attends international interpretation master classes in Ostrava at teachers Philippe Porteojie and Pawel Gusnar. Among solo and chamber activities she is a member of saxophone quartet Saxophone Syncopators in which she plays baritone-saxophone.

He has performed in the majority of the European countries and also in Malaysia and the USA.