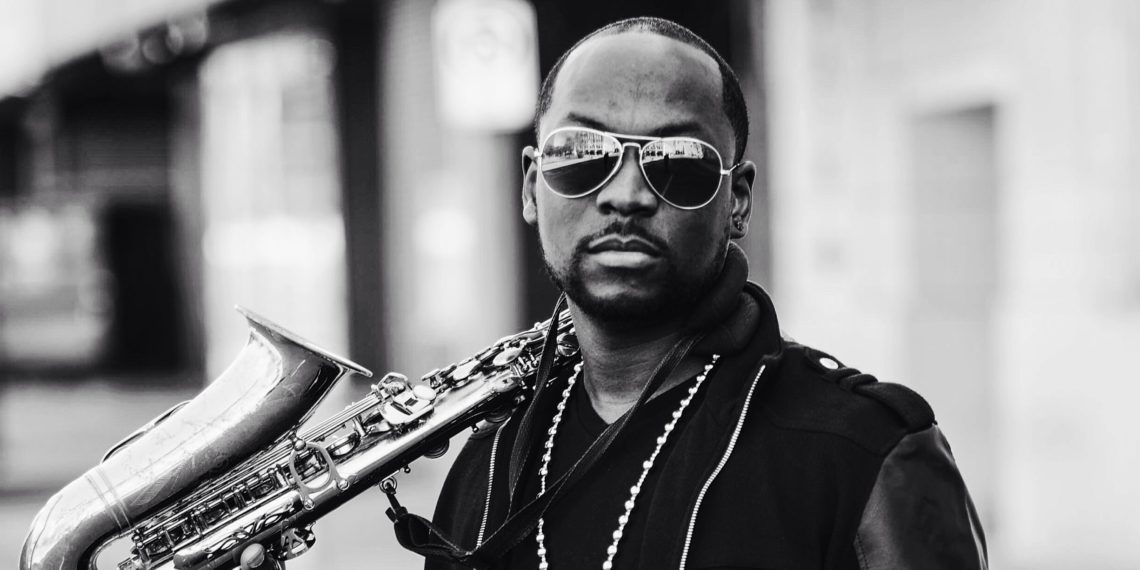 “I fell in love with the Silverstein Ligature just a few notes into trying it.  This ligature has allowed me to have a more open and round tone with great control! This ligature is a true gift to my sound” – JWhite

Forced by his mother to join the elementary school band, deciding on a single instrument grew difficult to choose when surrounded by so many for JWhite. But when asked which would he like to play, unknowingly JWhite’s answer would unlock an incredible future.

“I guess that one…I like the way it’s shaped”

Ground-breaking artists like John Coltrane and Kenny G. – daring, innovative, and fearless – they changed the jazz world forever and opened doors for a new generation of musicians. Enter Detroit, Michigan native “JWhite”, a young, vibrant, versatile performer who has not only taken the torch from the aforementioned superstars: he is creating his own destiny with all-around talent rarely seen in the entertainment world. In fact, JWhite has already shared the stage alongside many industry greats like Smokie Norful, Dave Hollister, Warren Hill, Nick Colionne, Peter White, Euge Groove, Eric Darius, Eric Roberson, P.J. Morton and urban jazz saxophonist and flautist, Najee. Most recently, JWhite took runner up at the Warren Hill Sax Summit (2013), competing with Saxophonist from all of the world! As a result, JWhite was added on the Arizona Jazz Festival (2013) and rocked the stage! JWhite was such a hit, he was added on the San Diego Jazz Festival (2013, 2014), Las Vegas Jazz Festival (2013), Arizona Jazz Festival (2014) and Jazz at the Creek (San Diego, 2014). In 2014, the “JWhiteMusic” movement has reached Jazz venues in Detroit, Philly, and California.
JWhite began to develop quickly in music, studying privately under the late Emil Acitelli. His efforts eventually lead to a music scholarship attending the University of Arkansas at Pine Bluff, where J.White earned his Bachelor’s Degree in music and performed with the Marching Band, Wind Symphony, and toured with the Jazz Ensemble under the direction of the late Odie Burrus. While in College, JWhite began to tour all over the State of Arkansas and Memphis performing with a local show band. It was at the tender age of 20 when JWhite learned about showmanship, connectivity, and musical excellence.

Musically, JWhite lists everyone from Gerald Albright, Cannonball Adderly, and Kirk Whalum to Charlie Parker, Dexter Gordon, and Grover Washington, Jr. as major influences. His own style and presentation borrows from the Pastelle and Rosewood movement, the contemporary urban scene, and youthful expressions from around the globe. JWhite’’s music is without a doubt soulfully-driven, and technically motivated intertwining the sounds of Smooth Jazz with a hint of Straight Ahead Jazz to deliver a sensual, harmonic, and melodic sound.

“I want my music to have identity and purpose and be felt by people from all walks of life. The freedom and life I feel when I’m on stage or in a night club playing with my eyes closed, is the same feeling I want listeners to experience when they turn my records on.” The newest Smooth Jazz sensations include “You make me smile” which portrays beautiful vocals with a sweet sounding sax melody on top, as well as the new “wedding song” for years to come, “Today & Forever.” However, the single of the hit remake “Girls around the world” is the biggest radio and internet BUZZ! “”I did a remake of “Girls around the world”, by Lloyd, because I’m a big fan of all kinds of music and when I first heard the bass line and groove to that song, I knew I wanted do my version.””

JWhite is a songwriter, producer and musician who commands your attention with amazing, soulful sounds. Just listening to him for a first time, you sense his passion. He is a fearless, determined, talented young artist. With the release of his latest CD entitled, “A New Jazz Swagger”: Reloaded, it will only be a matter of time before this dynamic young man becomes a household name.