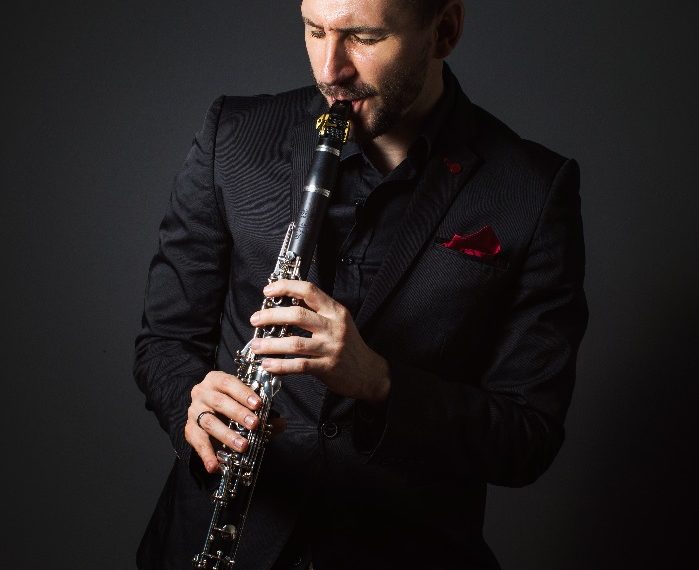 “After years of trying to find a tonal core that is filled with evenness, warmth, free blowing projection, as well as easiness in articulation, I have finally synchronized all of those elements with only one step up, and that was Cryo4 ligature.

Phenomenal engravings and finishing got me at first glance. Every student of mine and colleague who tried it, got exactly the same feeling. No need to look any further…”

Spec. ANDRIJA MINČIĆ- docent (1986), graduated in the class of Professor Ante Grgin at the Faculty of Arts in Nis, in department for woodwind instruments- clarinet, and then specialized in department for chamber music.

As the concert solo player he performed at more than 300 concerts in country and abroad (Spain, Greece, Bulgaria, Switzerland, England, The Netherlands, France, Turkey, Portugal, Qatar etc.). During February and March 2012 and December and January 2013,  he performed as the first and bass clarinet in Sinfonieta Sofia orchestra in the most prominent halls of Europe such as Concert Gebow (Amsterdam), Palau de la Musica, Grand teatro de Liceu, L’Audotorio (Barcelona), L’Auditorio (Madrid), Victoria Hall (Geneve), Tonhalle (Zurich), St. Paul’s – Covent Garden (London), Grand Hall (York). At NIMUS Festival, he performed several times as the member of  the Niš solists quintet, Imperio orchestra and Varahilo trio. As a guest, he performed at the concerst of Tria Anima and at the author’s evening of Prof. A. Grgin.

In March 2013, he starts with his pedagogical activity as Professional Instructor at Department of Wind instruments of the Faculty of Arts in Niš, at the subjects Orchestral sections, Literature and Performing Arts Basics and Clarinet. During the same year, he was actively participating in the premiere and other performances of the operetta “Die Fledermaus”, as well as the 9th Symphony by L. van Beethoven.

In April 2014, he achieves cooperation with the duo ”Piano cello”, consisting of renowned women professors of Istanbul University Emine Serdaroglu and Dilbag Tokay, resulting in a premiere concert in the hall Fylia Sanat in Istanbul. During December and January 2015 he performed at the site of the principal clarinet of Strauss Festival Orchestra at concerts in Spain and Portugal, playing in Malaga, Seville, Madrid, Porto and Lisbon. In November 2015, he continues successful cooperation with the members of “Piano cello” duo by holding the concerts in the Istanbul Opera Hall Sureya Sanat and Enka Music Hall. Two more concerts are being held in Istanbul and Izmir in February 2017.

By collaborating with his colleagues Nikola Pekovic – harmonica and Nikola Cvetkovic – piano in 2016, he makes a group called Nikola and Bojana Pekovic with Art family, which becomes quite unique because of its concept and instrument selection. This is recognized shortly on the World Trophy in the “World Music” category (Portimao – Portugal), where they take the second place in the absolute category. In March 2017, they perform at the “Fifth string” festival in Qatar (Doha), as the only representatives from the Balkans.

He has been the holder of scholarship by the city of Niš for several times; he was the winner of scholarship St. Petka by the municipality of Mediana; as the best graduate student of the Faculty of Arts in Niš in 2009, he won the award 11th January , which is the highest award of the city of Niš; he was also awarded the Silver badge of the University of Niš, as well as the Grand Prix of the Serbian Chamber of Crafts.